In addition to inspiring women through, blogs, spoken word and novelty products, IGW inspires with the I’m A Good Woman Literary series. Read books by the founder, Jae Henderrson and be inspired today. You can find complete information about the author and each of her books at www.jaehendersonauthor.com. 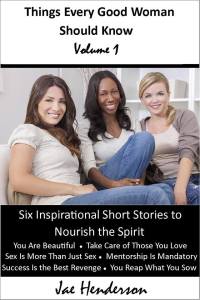 If you could stop a woman from making the same mistakes you did would you—whether it be in love, friendships, profession, finances, or health. In “Things Every Good Woman Should Know Volume 1” Jae Henderson has crafted six inspirational stories designed to educate women on the importance of carefully considering your options when traveling through this journey we call life. Each character allows you to peek into their lives and experience the joys and the pains of love, sex, success, family, and more. These stories could be described as fables for adults. Just like the ones you read as children, except with adult content and real drama. You are invited to learn the moral of each story that will surely nourish the spirit and strengthen the soul.Each story is firmly rooted in Biblical principles and is jam packed with exciting life-altering situations and life-applicable teachings. Once again, demonstrating that God is good. He may not always keep you from falling, but He can arrange for you to make a soft landing. Be inspired today!

ong dreamed of having it all and as one of Memphis’ most sought after event planners she appears to have achieved it. Even though creating breathtaking events and rubbing elbows with the social elite seems fulfilling, there’s one thing missing from her fairy tale life—her prince charming. After a string of failed, faith-challenging relationships this woman of God refuses to give up on meeting the man of her dreams. Tee knows in her heart that God will answer her prayers–SOMEDAY. Until then, she tries to remain prayerful and content by occupying her time with work, her sister’s drama-filled marriage, counseling wayward youth and her hilarious girlfriends. When Tee is introduced to an incredibly handsome, retired NFL player named Michael Stokes, it seems that someday has finally arrived. There’s one problem. He’s been marked for death.
Michael Stokes thought life was over after a knee injury claimed his career as a NFL superstar. He realized just how wrong he was after dedicating his life to Christ and beginning on a wonderful new path as a motivational speaker and book author. He even meets Tee, a woman who makes all the other women he’s dated seem like a waste of time. But when his past comes back to haunt him Michael’s greatest fear is not the loss of his lucrative contract but losing the woman who must be heaven sent. Will Tee accept aman who has a killer on his trail and a surprising new addition to his family? “Someday” is full of adventure, excitement, thrills, laughter and love as Tee and Michael fight to stay alive in order to stay together.

Read An Excerpt from Someday

Tee realizes dreams do come true when she becomes the wife of retired NFL great Michael Stokes. But fairytales are fleeting and they return from the honeymoon to find the devil is still busy. Tee learns the hard way not everyone is happy she found Mr. Righteous. Michael’s reputation is rocked by a scandal that could end his new career as a motivational speaker. As if that weren’t enough, crazy Rebecca DeFoy is back—or is she? Can a love so fragile and new withstand these tumultuous times?

Sandy is expecting a new bundle of joy but the baby blues take over when her adulterous past comes back to haunt her. Lenice finally seeks help for her man-hating ways, but learning to love again is hard to do even if there is a good man willing to help. Her twin, Lenora, has a love affair with food that is threatening her health and her marriage. Also, Tiffany finds herself living single after giving her married lover the boot, but she isn’t fond of living without his loot. Can she find the strength to take care of herself and her son on her own, or will her love of money keep her tied to a sinful relationship?

“Someday, Too” delves into the complexities of love, friendship and faith. It reminds us that God can provide all your needs but first, you have to be willing to trust Him.

Read An Excerpt from Someday, Too.

The grand finale of the Someday Trilogy!

Tee and Michael Stokes have realized that life for them will never be normal. As heads of a new entertainment management company and expecting parents, it’s now more important than ever to figure out if their stalker, Rebecca DeFoy, is dead or alive. If she’s alive, will she kill again? If she’s dead, who is impersonating her and why? Whichever the case, they must put an end to the harassment once and for all before she puts an end to them.

Their friends have drama of their own……

Tiffany has traded in her tight clothes and stilettos for big hats and conservative dresses as she tries to prove to one of Memphis’ most promising young pastors that she is worthy of a man in the pulpit. Can she control her feelings for Michael, or will temptation ruin her chances for love and her friendship with Tee? Lenice has entered the world of online dating. Her keystrokes can’t mask the pain of a failed relationship, but they could lead her into the life of an elderly millionaire. Lenora’s weight loss has changed her body and her attitude for the better, but her husband’s job at the Kitty Kat Club may be too much for even the new and improved Lenora to handle.

Join Tee, Michael, and their hilarious friends as they discover that the key to surviving this journey called life is to hold on tight to the hands of the ones you love while you pray for faith to see you through. Forever and a Day will keep you loving, laughing, and on the edge of your seat!

Read An Excerpt from Forever and a Day